The American story is a tale of immigration, of people fleeing conflict and oppression to resettle in a new land. It is also the tale of working hard, giving back to communities, and reaching out with helping hands.

Here, we share the story of three Good Neighbors whose lives intertwine with the flow of immigrants and refugees seeking safe harbor in central Pennsylvania. Makaya Revell fled murderous police and is now establishing an orphanage for children in his native Democratic Republic of Congo. Sasha Jovic left war-torn Bosnia and sought work helping others rebuild their lives. Gary Hobday volunteers to help resettling families and has found lasting friendships. 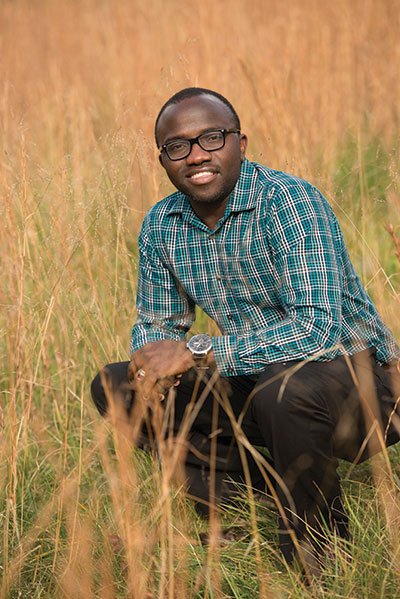 Makaya Revell lived a childhood that seemed normal, even privileged. Hanging out with friends. Going to movies. Playing soccer. Both parents worked for the government, giving the family protection and the means to hire a driver, cook and housemaid.

But unrest churned in the Democratic Republic of Congo. Civil war erupted when Revell was 11. At 16, having and just gotten his driver’s license, he got in an accident.

The police went looking for him and found his father, ill in the hospital. They beat his father to death. Barging into Revell’s home, they shot his 8-year-old brother, who died from infection.

Revell fled to the port in his home city and climbed aboard a ship whose captain shepherded him to South America. From there, his journey took him to New Orleans and the Philadelphia area, from detention to foster care.

After Revell aged out of foster care at 18, his social worker found Friendship House, the Golden Vision Foundation’s York residence for immigrants. That was also when he learned that his mother, Marie Mambu Makaya, had died of a heart attack. She was the only person Revell had truly loved, the compassionate woman who gave to orphanages and churches, defied her angry family to give birth to him when she was 18 years old, and once enrolled him in judo class not to fight back against bullies, but to have the strength to run.

Heartbroken and plunged into depression, he was offered psychotherapy with Dr. Elizabeth Revell, a York area psychologist. They clicked, and in 2006, Revell and her husband, Dr. Alvin Revell, adopted their young charge and encouraged him to finish high school.

He never forgot that his homeland, where his two surviving brothers remain, had become a place of strife, injustice, and 10 million deaths. “The most vulnerable are children and the women,” he says. “Children are the victims of this chaos.”

In 2012, Revell founded the Marie Mambu Makaya Foundation to build an orphanage for Congolese children (www.makayafoundation.org).

“I’m trying to live up to my mom’s dream, helping others, because that’s what Marie used to do,” says Revell. “I’m trying to give back where I came from and learning and understanding about suffering.”

In Democratic Republic of Congo, Revell says, 15 percent of children are orphans. That’s 800,000 children, “like the population of Columbus, Ohio,” vulnerable to torture, murder, and conscription as child soldiers or sex slaves. The orphanage will provide security, love and learning.

With a few hundred thousand dollars to raise, Revell speaks to groups and solicits donations. He’s confident of reaching his goal because the American people are “very, very compassionate.” He graduated from York College of Pennsylvania in May 2015. He’s studying for a master’s degree in international peace and conflict resolution from American University. He’d like to work in his native country and the United Nations, introducing policies centered around “human care” and empowering women.

Revell smiles easily. He seems like the 16-year-old boy he once was, until the mature 29-year-old emerges when he ponders a question about world peace or the security of women. He raises alpacas at his American parents’ York County farm. His life change has been “a paradigm shift, but in a positive way.” He knows he’s “in the right place at the right time.”

“We cannot fight these criminals with force,” he says. “We have to fight them with the good, doing good. That’s the only way they’ll be defeated.” 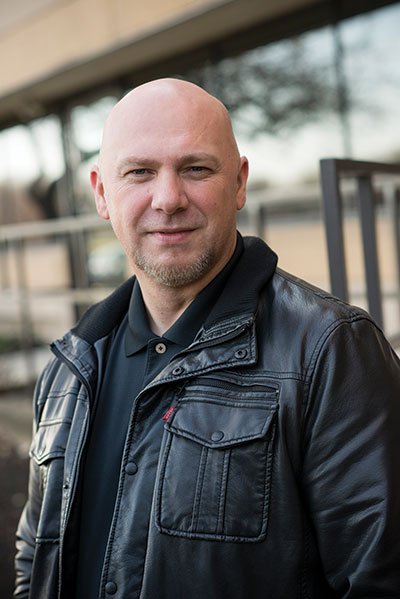 Sasha Jovic received a letter and donation from a former client. Once a refugee from Ukraine, she was now a registered nurse, happy to give back to those who helped her establish a new life in the United States.

“That touched me very heavily,” says Jovic. “She started from scratch. She put in several years of tough, hard work, but in the end, she made it.”

Jovic is program director for Catholic Charities of Harrisburg’s Immigration and Refugee Services, overseeing employment services, targeted services to remove barriers to employment, and advanced services for those ready to reach the next level of self-sufficiency.

His own story starts in Bosnia, the homeland he fled in 1992 as strife broke out. “I didn’t want to be part of that,” he says.

He lived for 10 years in Germany, rising to production manager of the biggest distribution center in Germany. He learned German. He married his high school sweetheart, who had also come there from Bosnia. Many family members, including his father, were in the U.S., part of a large Bosnian community in central Pennsylvania.

So he and his wife, Sladjana, came in 2002 and resettled in the Harrisburg area. From the start, Jovic sought work supporting refugees.

There is, he says, “much more going on behind the scenes” in refugee resettlement than people realize. Job training. English-language classes. Transportation. Child care. Medical appointments. Housing. Many of his clients take a 36-hour course preparing them to succeed in certified nurses’ assistant training. Their success rate, gauged by job placements, is 100 percent.

“It’s very tough, but you see progress,” he says.

Volunteers call, offering to help, and soon are partners, essential to helping families settle and learn new skills. “We take advantage of these calls,” Jovic says. “There are so many good people out there who are willing to help and who are ready to help.”

Agency clients are encouraged to give back to the community, and many do, getting involved in local causes and reaching back to help the refugees who follow them. When news of tragedies and horrors puts refugees in a bad light, Jovic doesn’t see setbacks but opportunities to educate.

“You’re trying to educate and explain what it’s all about,” he says. “What they do here, how they contribute to their communities.”  After all, he says, they left their homes “with only a couple bags of belongings.”

The father of two boys and two girls, ages 4 to 14, lights up when he talks about his kids. They keep him busy. He volunteers with his township fire police, helping organize and run community events.

“I give back as much as I can,” he says. “We all find a little bit of time to dedicate to the community. Every bit helps.”

The term “refugee,” he notes, isn’t a lifetime label but a phase of life. Jovic doesn’t define success by how much money he makes but by “how many success stories I have.”

“At the end of the day, I want to treat them as people. Folks. Neighbors.” 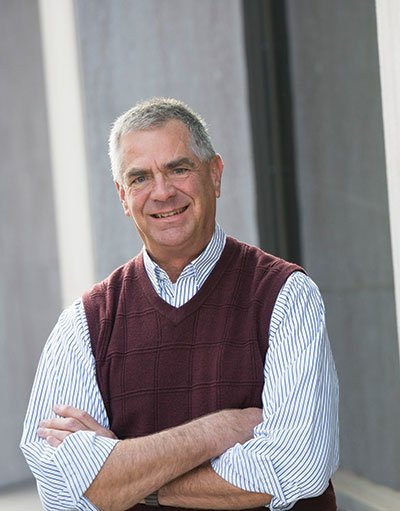 Gary Hobday has a knack for management, but he prefers putting his helping hands to work. The man who worked with a range of Lancaster institutions to fund and establish a community center for immigrants also teaches English, goes apartment hunting, helps enroll children in school, and drives immigrants to Philadelphia for citizenship tests.

He gets to be there when they clutch that little American flag at the citizenship ceremony. The practical help makes a difference, Hobday says, but the ultimate goal is building relationships. Immigrants need “a safe, friendly person to call” as they navigate American culture, someone to tell them they aren’t obligated to sign that official-looking warning about changing their power company.

“At the end of the day, the biggest thing we try to do is just be friends,” says Hobday, of Landisville.

Hobday and his wife, Carol, have long been devoted to community and church causes. After retiring from a career in high-tech manufacturing and management consulting, he spent time consulting on nonprofit management. That led to a year as executive director of a Lancaster coalition supporting refugees, followed by his ongoing support for those rebuilding lives shattered by war and strife.

Relationships with immigrants are built “through eating together. It’s through endless cups of tea,” says Hobday. The Hobdays’ friendships include a couple with two teenaged sons who all fled Baghdad, coming to the U.S. from a refugee camp in Egypt after the husband’s work with American companies in Iraq put them at risk. The husband is now a machine tool operator. The wife, “an amazing chef,” works for a cookie company that hires refugee women. The sons graduated from a Lancaster County high school.

“You would think, walking in the door, ‘What have we got in common with them?’” Hobday says. “But three hours later, we’re walking out and our faces hurt because we’ve been laughing and talking about everything. It’s just friendship and family when we open the door. We get hugs all around.”

Refugees and immigrants separate from friends, families, and beloved homes because they must, and not because they want to, says Hobday. Still, the United States is “Dreamland.”

“First and foremost, it’s security, but it’s followed closely by opportunity,” he says. “They do it themselves. I don’t see myself as doing it for them at all.”

While housing and jobs top the hierarchy of immigrants’ needs, Hobday and his wife also devote much of their time to language and literacy coaching–for instance, helping immigrants translate their skills into terms that American employers understand.

“Language and education are priorities from day one,” he says. “Education is the thing that keeps them moving to the next level.”

While he gives time and a listening ear to refugees, they are giving back to him, as well. Hobday sees life through their eyes, and not just because he recognizes the value in a day of not being shot at and of having plenty of food on the table.

“There is fear, and there is chaos, and all those things we typically don’t have to deal with,” he says. “You realize how fortunate you are. But I’m fortunate to know them. It’s a blessing, it really is, to know them and to be enriched by that friendship.”